Will a Fidget Spinner Help Your Child? 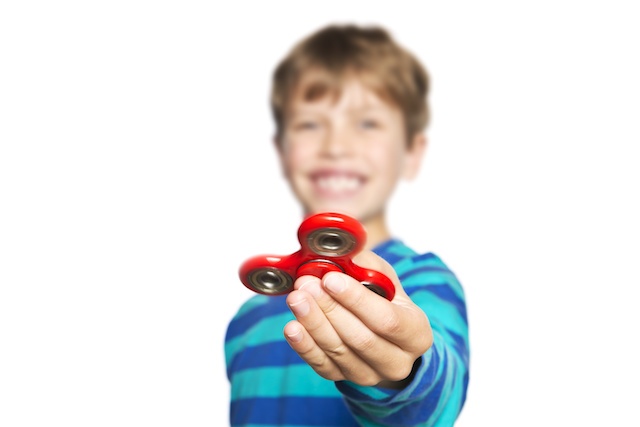 You've probably heard about fidget spinners. In spring 2017, they became all the rage among middle schoolers, although the technology actually goes back more than 20 years. The fidget spinner was created by a chemical engineer, Catherine Hettinger in the early 1990s. The device spins with a gentle push due to internal ball bearings that result in an almost perpetual motion.

Earlier versions of the fidget spinner were marketed to adults, coming in metallic colors like gold, brass and silver. They resembled traditional paperweights and were sometimes sold as a keychain attachment. While some office workers claimed to appreciate them as an alternative to nail chewing or other nervous habits, others found them simply a distraction.

Now, fidget spinners have been marketed as a supplementary therapy device for kids with ADHD, autism or anxiety. Since the phenomenon has spread so quickly, it's clear youth of all ages respond to them, but not everyone agrees they help those with learning differences.

The latest generation of fidget spinners is shaped like a triangle, with three nodes coming out of a circular center. Most kids hold the spinner between a finger and thumb in the center and get the nodes spinning rapidly with a quick push. Small enough to be held in the palm of a hand and relatively quiet, it is touted as a way to help kids who are challenged to stay still and focus their energy.

Many experts do subscribe to the idea that a fidget spinner can help kids with behavioral and learning differences. One doctor told CBS news that therapists have always used similar devices to help people remain focused, so the idea should not be considered radical or controversial: Such a spinner can help settle and focus a child who is very easily distracted. One psychiatrist also weighed in that spinners can help expend energy for kids hypersensitive to their environments, who might otherwise bite their nails or skin.

But according to one expert, fidget spinners do not actually help kids with ADHD or anxiety. At the very least, there is no evidence that the devices have any measurable benefit. A Duke University psychologist told NPR that his concern was that parents may follow a fad and buy the toy instead of using other well-known and effective techniques for managing the conditions of kids with learning differences.

A fidget spinner might seem an ideal choice for parents who want their kids to settle in the most structured of places — school. However, an increasing number of teachers are becoming resistant to their use in the classroom. Although fidget spinners are quiet on an individual basis, the whirring sound they make turns into a roar when multiplied among dozens of students. Many schools have in fact banned fidget spinners because of the alleged disruption.

Should Your Child Make the Switch?

As parents know, it's never easy to find the right help that can make life easier for them or their children. Trying out a fidget spinner at home, where you can monitor the environment, before taking it to school or other activities is one way to gauge whether it's beneficial for your child and not an annoyance to other caregivers or parents.

If your child struggles to pay attention in class or is distracted and fidgety, we invite you to explore The Brain Balance Program, a non-medical, drug-free, whole child approach to get your child on track. Get started today!

Stick With It! Teaching Your Child the Power of Perseverance